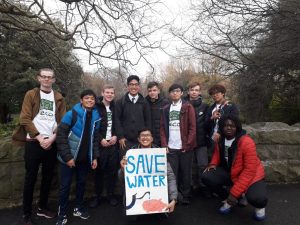 Our view on the #StrikeforClimate

ECO-UNESCO is Irelands environmental education and youth organisation. For over 30 years, ECO-UNESCO has been engaging,

educating and empowering young people to take action on environmental issues of concern to them. These are young people who have been concerned

about environmental degradation, including biodiversity loss, over–consumption and climate change. As educators, we have worked to build their awareness,

their confidence and self-esteem so that they can make choices and take an active role in society.

Young people are very concerned about climate change, about its impact on their future and the future of all life on this planet; they have recognised the urgency to act.

Through work such as ours young people have been playing a role as active citizens through their actions and around issues identified by them, with solutions

identified by them and carried out by them. We’ve seen over 300,000 young people across Ireland take environmental action since we first opened our doors in 1986.

With each action taken, a real positive change is affected.

Perhaps in the past, the young-person revolution has been more silent due to the absence of social and digital media. And now with social media and other new technologies,

young people are able to organise, mobilise and take direct action for themselves.

At ECO-UNESCO, we have seen just how passionate young people are about environmental action through our Young Environmental Awards, which annually sees

more than 4,000 young people take action and make a difference to our environment.

Our society has a real responsibility to our children and young people. That they are expressing their concerns through organised actions, such as the upcoming schools strikes,

should be supported.Through these schools strikes, they are both taking control of their own future and empowering other young people to take action.

These protests are indicative of an awareness of the civic-mindedness and social responsibility that drive positive change in society.

We encourage young people to be active citizens and we should support them when they are. Our young people have been voicing their environmental concerns for decades but now they are mobilising themselves due to the urgency of climate change.

It’s time that policymakers and decision-makers listened to them; this is long overdue.

Proud to be a QQI accredited training centre