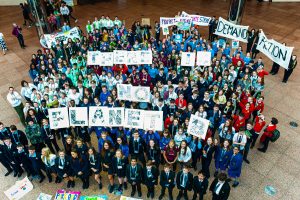 “There’s No Planet B” – Young People Strike for Climate Action

Since August 2018, young people in schools across Europe and Australia have been walking out of class in order to take part in

young people are calling on MPs to take emergency action “because it is our future” (Laville, Noor and Walker, 2019).

This young person protest movement has been named #FridaysForFuture (FFF).

to coincide with a global day of protest known as the School Strike for Climate Action. Possible measures that the young

people are considering are striking outside Leinster House, in front of school gates and outside local government buildings.

The protests have been spearheaded by Swedish 16-year-old Greta Thunberg. On 20th August 2018, Greta decided not to attend

school until the 2018 Swedish general elections after heat waves and wildfires in Sweden. She protested by sitting outside the Parliament building every day

during school hours. Her demands were that the Swedish government reduce carbon emissions as per the Paris Agreement. On 7 September,

just before the general elections, she announced that she would continue to strike every Friday until Sweden aligns with the Paris Agreement.

She coined the slogan FridaysForFuture, which has gained worldwide attention.

This has inspired young people’s strikes in at least 270 cities in countries including Australia, Austria, Belgium, Germany,

the Netherlands, Denmark, Switzerland, the UK and Ireland.

On 7th Feb, over 10,000 young people protested outside The Hague, Netherlands, which resulted in an open letter being

drafted and signed by 350 Dutch scientists in support of the demonstrations. The letter, published by Trouw.nl, notes that “on the basis of the

goes hand in hand with effective measures and a change in behaviour we can solve this problem in time. Otherwise the children who are protesting

in support of their own future will be the victims.” (Dutch passage translated in Newstalk, 2019. No author available.)

15th February saw thousands of young people take to the streets all over the UK in protest. Similarly, on 13th February 2019,

over 400 young people protested in Dublin. The young people plan to hold a variety of actions on March 15th, the nature of which will be

decided in the coming weeks. The young people hope to meet up with others from other schools to plan the climate actions together.

60 schools nationwide have already signed up to walk out of lessons on Friday, March 15th (Bradley, 2019). Some students

from the following schools have already shown involvement in the protests –

Young people in these schools are planning protests to highlight the dangers posed by the failure of adults to address climate change.

Quotes from the young people highlight their passion, drive and the mindset fuelling the protests –

“This has been going on since the 19th century. Governments have lots of power yet it takes young peoples to try and make a change”

“This isn’t just a one-day thing or a day off school for us. This is us trying to make a bigger impact on the world.” (educatetogether.ie).

Similarly, teachers and principals of schools have recognised the opportunity these protests present for empowering young people towards climate action –

“This is an excellent opportunity for school principals and teachers, around the country, to promote [an] authentic Young Person Voice, and I

would strongly urge other school leaders to join the network and support [the young people] on the March 15th,”

Freya, 13, and Bee, 14, from Sydney Girls high school, said they felt like their voices were being heard. “Because we don’t have a vote in the elections, it sometimes

feels like you’re silent. I think they are misjudging who we are,” Freya said. “They are underestimating us, you can look around and see how many people are here.”

Bee added: “You can influence something. Now it actually feels like I am making a difference about something I believe in” (Zhou, 2018).

A Twitter account @PulltheBrakes has been set up as an initial means of communication for Irish young people taking part in the protests.

A young person-built website will follow shortly once they have had time to meet and plan. Young peoples from Stepaside ETSS

and skills by encouraging an approach of “thinking globally; acting locally” and “learning by doing.”

ECO-UNESCO has always supported young people who have decided to take action on climate change. Young people are very concerned

about climate change, about its impact on their future and the future of all life on this planet; they have recognised the urgency to act.

Through these schools strikes, they are both taking control of their own future and empowering other young people to take action. These protests are

indicative of an awareness of the civic-mindedness and social responsibility that drive positive change in society.